The Magpies - a brief history of Holsworthy AFC 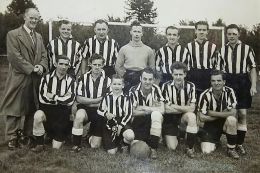 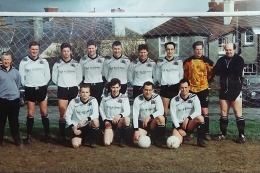 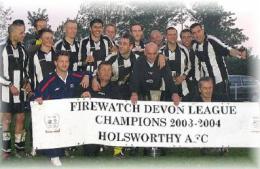 Holsworthy Football Club was formed on the 5th October 1891 when a group of local businessmen met at the Rectory to decide upon funding a football team and also to decide whether that team should play soccer or rugby. Soccer won the day and the fledgling club was born. After the Second World War, Holsworthy had to play their football in Stanhope Park until 1949 when they moved to their present home at Upcott Field.

At the start of the 2003/04 season they joined the Devon County League and won the championship in their first season.

Holsworthy joined the South West Peninsula League Premier Division when it was formed in 2007. Towards the end of the 2008/09 season they won the Torridge Cup. At the start of the 2010/2011 season Holsworthy AFC will begin playing in the South West Peninsula League Division 1 West following relegation from the Premier Division.

In addition to the first team Holsworthy also have a second team “The Reserves” which, until the end of the 2005/06 season, played in the North Devon Premier League. They performed well here and actually won the league title in 1975/76. The Reserves joined the East Cornwall League Division 1 for the 2006/07 season but they had to pull out of the league during the 2015/16 season due to the unavailability of players to travel. The 2016/17 seasons sees them begin a return by starting play in the North Devon Intermediate 2 Division and gained promotion to the Intermediate 1 Division for the 2017/18 season.

Holsworthy’s Third team competed in the Kingsley League and in 2005/06 season gained runners up position and were winners of the Subsidiary Cup. They had previously competed in this league with some success before being elected to the North Devon Intermediate 2 Division, where they won the Bideford Tool Cup and the Subsidiary Cup in their first season 1999/2000. They won the Subsidiary Cup again in 2009/10 season. The 3rds were disbanded for the 2015/16 season in favour of an Under 18’s team playing in the Devon County Youth League who achieved winners of the North League and runners up of the Devon League. The team pulled out due to player unavailability for the 2016/17 season but restarted in the North League for the 2017/18 season.

Holsworthy AFC also supports up to 9 youth sides and the club look to them in order to secure the future of new players into the club team.